What did we do to help?

Ferguson Roofing provided support for the St. Louis Blues Blind Hockey Club with a financial donation. This contribution works to support visually impaired athletes, the growth of the sport of hockey for the visually impaired, and the organization’s long-term goal of gaining inclusion in the Winter Paralympic Games. 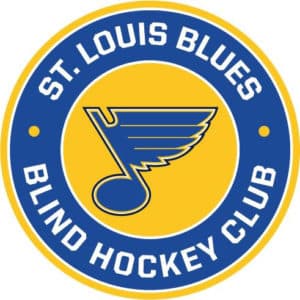 What does the St. Louis Blues Blind Hockey Club do?

The St. Louis Blues Blind Hockey Club’s mission is to provide those with visual impairments the opportunity to fully participate in a team sport: ice hockey. Their goal is to allow players with limited spectrum of sight to enjoy the teamwork, competition, and athleticism that is synonymous with this sport. We are very lucky to have this club in our community as they are one of only eight teams in the whole country that makes this sport accessible to the visually impaired.

Players have sight impairments ranging from 10% to 100% loss of vision. The league makes modifications to the equipment that allows players to track the game through auditory signals. For example, the puck is full of ball bearings that make noise and the nets are shorter. This allows the puck to be easier to follow. They also limit play to half the rink.

One of the St. Louis Blues Blind Hockey Club’s future goals includes expanding blind hockey beyond the United States and Canada to reach six more countries. Once the sport achieves international participation by eight countries, they will be eligible to participate in a Blind Hockey World Championship. From there, they aim to move toward playing in the Paralympic Games.

Why did we choose to support St. Louis Blues Blind Hockey Club?

The Ferguson Roofing Community selected this organization because of its local, national, and international impact through helping the visually impaired learn the value of sportsmanship, perseverance, teamwork, and competition through their shared love of hockey. The Blues are helping players in St. Louis and across the globe by fostering a commitment to this growing international sport.